I was heartbroken to watch a four year old girl having 8 rotten teeth surgically removed on Channel 4’s Junk Food Kids – Who’s to Blame?  Also featured were a boy with fatty liver disease and an obese 13y old girl whose parents wanted her to have gastric band surgery in preference to improving the family’s diet.   For all of these, typical fare at home was ready meals, takeaways, jacket potatoes with baked beans, piles of pasta, pizza, crisps, chocolate and sweet drinks – all guaranteed to pile weight on and rot teeth. The social media backlash accused parents of child abuse for letting their kids eat so badly but the parents were at their wits end. To them processed, sugary diets were normal and they didn’t know what to do to make them better.

Nutrition experts have campaigned many times for governmental control on sugar use by food and drink manufacturers. The government declined arguing that consumers can choose. Can they really? Manufacturers spend huge sums on advertising – and it works. Junk food is cheap, easy, quick and everyone eats it don’t they? Parents are left with a battle on their hands, parental discipline isn’t fashionable and a third of our children are overweight, many with bad teeth, both of which are entirely preventable.

What can we do? It seems the government isn’t going to help us and the manufacturers won’t so we need to support each other in raising awareness so that drinking water and eating real food become normal again.  A dentist near where I live has created a Sugar Shock poster showing the amount of sugar in different drinks. It’s brilliant! I had no idea that flavoured milk is worst of all. A local cafe has a lovely Michael Pollen quote on their wall ‘don’t eat anything your great grandmother wouldn’t recognise as food’.  What can you do to help spread the message?

Top tip – for the sake of the children, lets help get each other back into real food 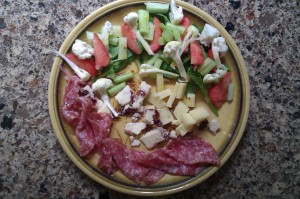