What do Brits do in a crisis? – put the kettle on! There is no calamity so great that it cannot be eased by a ‘nice cup of tea’.  We’ve even given it a special day of its own. 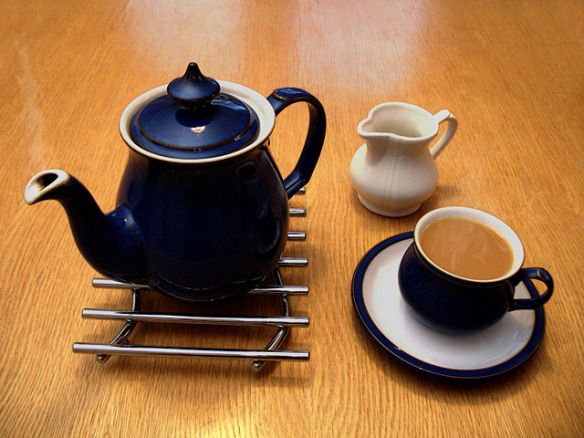 We started drinking tea in Britain way back in the mid 1600s when it was referred to as ‘China drink. We quickly took it to our hearts even though it was fantastically expensive due to import tax and was often kept in locked chests to prevent pilfering. It’s cheap as chips now and we consume 165 million cups a day!! That’s 60.2 billion cups a year and around double the coffee we drink (UK coffee week was 16-22th April).

You can read about the history of tea and all the different types on the Tea Association website.  (One point for caution: they talk about what’s in tea and consider fluoride to be a nutrient which it is not; it’s a neurotoxin.)

There are so many types to sample and enjoy. There’s black tea, green tea, white tea, tea flavoured with flowers and herbs – even without including the herbal teas (called tisanes). When I was a student, there was a tea stall on Bath indoor market. From the array of exotic leaves, I would make my choice, then watch in wonder as the half pound was weighed and poured onto a single sheet of paper that magically became a parcel tied with string.  (I don’t know whether they still do this wondrous packaging but you can still buy tea in Bath market and I’m thrilled to see that my other favourite stalls are still there – selling cheese and second-hand books.)

Our favourite brew supports our health with anti-oxidant polyphenols and flavonoids. There are detriments too from caffeine and fluoride so it’s best have water sometimes rather than drinking tea (and coffee) all day long. It’s also diuretic and can play havoc with your bladder. If you take sugar, work on giving it up. I had one client who was surprised to discover she was consuming 24 teaspoons of sugar a day just from drinking tea! 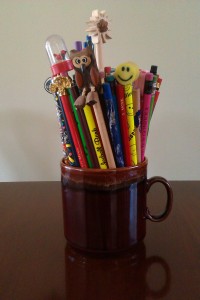 My old pint pot now relegated to housing part of my pencil collection.

We don’t treat tea drinking with the elaborate rituals of China or Japan, usually using tea bags and brewing in a mug at home and work but we certainly do all like our tea a certain way – and in our favourite cup/mug. Some like a pint pot brewed so strong the spoon very nearly stands up it in. Others dip the bag in for a microsecond and barely colour the water. And I don’t dare comment on the milk first or tea first debate! 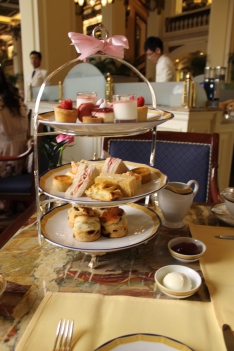 Afternoon tea, however, has become a special event with delicate china cups and saucers, one pot for the tea, one for hot water, a little jug of milk and a tiered cake stand bearing dainty sandwiches, scones and cake.

Not healthy of course with all that flour and sugar but an inbuilt memory of a more genteel age. At least that’s how it should be; I was horrified on a cream tea spa day at a posh hotel with a friend to have a chunky Starbucks mug plonked down in front of me which completely jarred against the rest of our classy treat.

Do you always snack with your cuppa? It’s another of those marketing-induced habits. Think of Rich Tea – “a drink’s too wet without one” or “Have a break have a ….” you know the rest; that’s how successful they are at fixing their messages in our psyche. 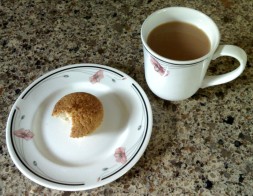 They’ve normalised snacking at every point through the day so now we graze constantly like we never did before. Tea rooms and coffee shops offer enormous portions of cakes and slices as I wrote about muffins vs buns.

So drink tea in moderation, for the pleasure of it and the good things it contains, rather than as your principle hydrator.  Realise that you can have it on its own. If you really want a snack, have a small bun or biscuit you’ve made yourself, or better still a handful of nuts or some fresh coconut. At the bottom of my recipes page are links to lots of websites with great recipes. Let me know of other healthy snacks you like.

Top tip: Enjoy your cuppa and be cheered.